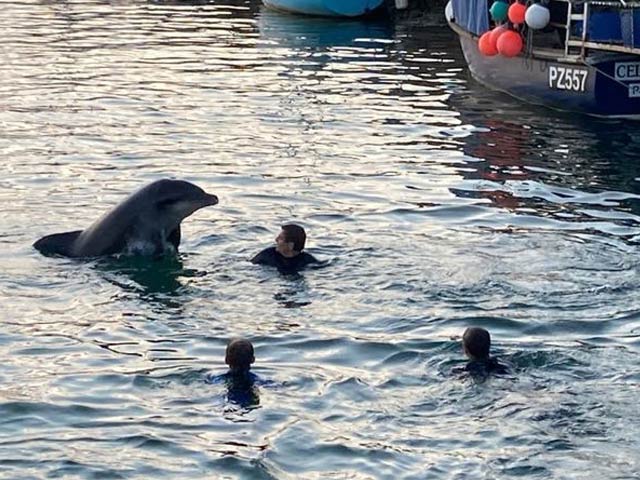 A scene from the video in which a dolphin named Nick can be seen very close to humans. Photo: Courtesy Daily Mail

London: The dolphin, which is known for its extraordinary intimacy with humans, has unfortunately lost its life due to its positive nature. The dolphin’s name is Nick, who often came to the swimmers and spent time with them.

The British county of Cornwall has some of the most beautiful beaches in the world and dolphins are also common here. However, for many months a dolphin was seen on the shores of Hail, which was happy to come to humans and swim with them. Gradually his fame spread and people started coming to see him.

On the other hand, dolphin experts warn that this dolphin may harm someone or harm themselves. Other dolphin experts have warned that it may be in a sexual state and that is why it is coming to people. He warned that in this way the creature could harm humans. The area’s wildlife department also took notice.

However, the body of a dolphin was found which was identified by the marks on its body and it is believed that it is the same dolphin Nick. Unfortunately, the dolphin was severely injured by the wing of a boat. On the other hand, British divers have also examined his body.

Nick was seen in April and July of the same year, and she lived in the waters of the Scaly Islands. She arrived at High Harbor in August and was delighted to be there, especially with the young swimmers.

In this article:died, dolphin, philanthropy