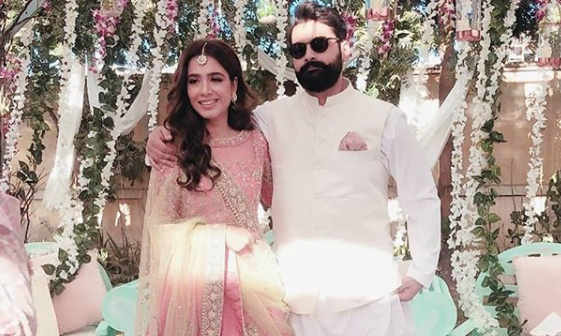 Pakistan’s renowned actress Mansha Pasha and social activist and lawyer Jibran Nasir engaged on December 22 this year, after which many videos and photos of the event went viral on social media.

While the duo was lauded by fans, some users also noticed motives and repression on a viral video on social media.

But A user shared a screenshot of this video criticized Mansha Pasha and Jibran Nasir.

In her tweet, she said, “Jabran Nasir is asking before kissing Mansha whether this is permissible. Is it permissible to kiss after the engagement? Weird ‘.

And Finally, the actress responds to all those critics, saying that people cannot name brutal ideology.

Mansha Pasha shared a tweet in which wrote, ” The world today is such that whatever people don’t know about you, they create. They piece together what they hear from rumors, social media as well as assumptions & lies. It spreads really fast by the touch of a button. Stay away from such acts. You’ll be held accountable! ‘

Retweeting the tweet, furthermore, Mansha Pasha wrote, ” This is esp true for me with regards to the troll comments on some of my engagement photos. Assumptions made on my life, my choices, my previous relationships. U cant justify cruelty by calling it “an opinion”. Esp if it is a worthless opinion.”

She said, “You looked like a queen Mansha and your face reflected true happiness M.A and nobody can take those moments away from you. They hate because of empty hearts and minds. I’m just going to send you positive energy to fill your timeline with “

Remember that news of Mansha Pasha and Jibran Nasir’s relationship has been appearing in the media for several months, after which this month they both also engaged in ‘official’ engagement.