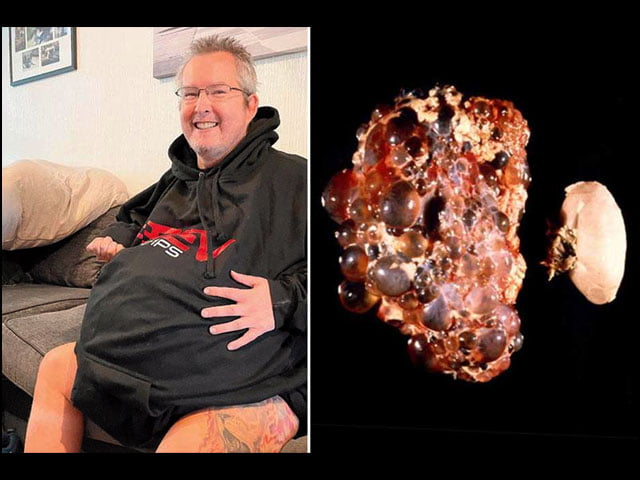 The patient was suffering from a disease called PKD, which caused his kidneys to become five times larger than normal. (Photos: Social Media)

London: A few months ago, Warren Higgs, a British citizen, had his kidneys removed due to being overweight and overweight, which weighed a total of 77 pounds.

Although it is the largest human kidney in history, it was the patient’s life because of its large size.

According to the details, Warren Higgs had a disease called “Polycystic Kidney Disease” (PKD) which made his kidneys so big that it was difficult for him to get up, sit up and walk.

Not only that, but his stomach was also abnormally swollen.

Seeing his condition, the doctors at Churchill Hospital Oxford decided to operate and remove both kidneys, otherwise the patient could die.

After a two-hour careful operation, Warren Higgs’ kidneys were removed and when weighed, they were found to be five times larger in size than normal and healthy human kidneys, while weighing a total of 77 pounds.

It is also a world record for kidney size and weight.

The previous world record for the heaviest human kidney was held by an Indian citizen who weighed 16.3 pounds. He too was operated on to save the man’s life.

Warren Higgs is now free of both large kidneys and pain, but at the same time he has to undergo dialysis every third day, which is a new cause of pain.