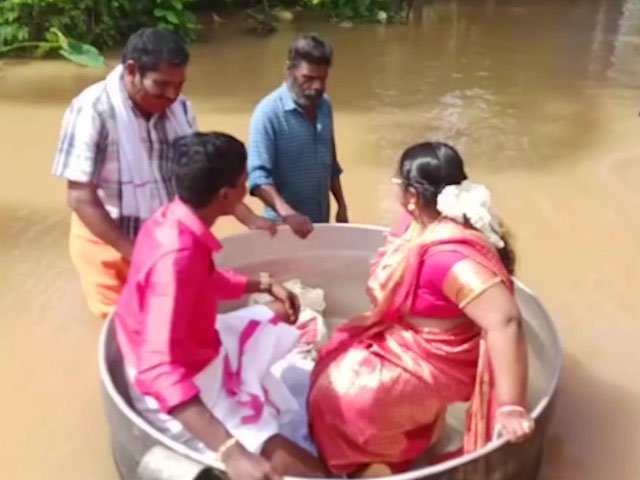 Kochi: Rains and floods wreaked havoc in the Indian state of Kerala, but a couple came up with a unique way instead of suspending their wedding.

This is the story of this interesting wedding ceremony in which even the flood could not stop the desire of the bride and groom to be one. The couple had to go to the temple for the wedding ceremony but the rapid flow of knee-deep floodwaters in the streets was also taking away the couple’s hopes.

When does love give up once it has settled down? The couple built a large cooking pot on the boat to travel in the flood relay when there was no ride. The bride and groom, dressed in the traditional manner, reached the temple in a cauldron.

VIDEO A couple in India’s southern state of Kerala use a large cooking pot borrowed from a temple to get through floodwaters and reach their wedding venue pic.twitter.com/fYk82XTD7Q

The video, which went viral on social media, shows the bride and groom sitting in a cauldron and two pedestrians pushing in a flood, and the couple managed to reach the temple.

In a short ceremony at the temple, the two tied the knot and returned home in the same cauldron, with photographers present to film the entire scene.

The bride and groom described their wedding as memorable.