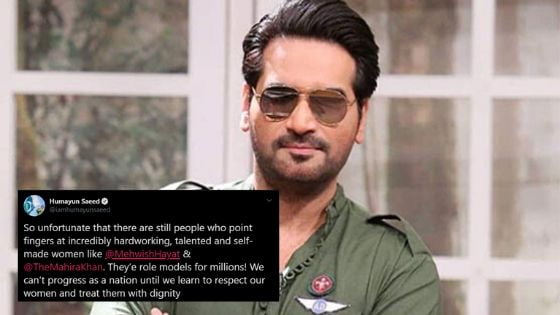 Actor Humayun Saeed termed Mahira Khan and Mehwish Hayat a role model for millions of people, saying that no nation can move forward without honoring its women.

Yesterday, a woman named Momal described Mahira Khan as a “2 takay ki orat” and said that women like you have no status in society. In addition, the woman used several inappropriate phrases for Mahira. To which Mahira Khan replied to the lady and said that your mind was clear in your words.

Actor Shaan said shame on a woman who used inappropriate phrases for Mahira Khan, saying that you are ashamed to be Pakistani.

After Shaan Shahid, Humayun Saeed has also raised his voice in favor of Mahira Khan saying that unfortunately we still have people who raise their fingers on incredibly hard-working, talented and self-made women like Mahira Khan and Mehwish Hayat. They are role models for millions of people.

Humayun Saeed added that we, as a nation, cannot move forward. Unless we learn to respect our women and treat them with dignity.

On Humayun Saeed’s tweet, actress Mehwish Hayat responded by applauding his thoughts and said that:
She is sorry to see that in the era of “Me Too” when a male partner voices a woman. He is neither accepted nor praised.

Humayun Saeed Many thanks for your support. And glad to see that there are still some gentlemen around with their solemn voice.