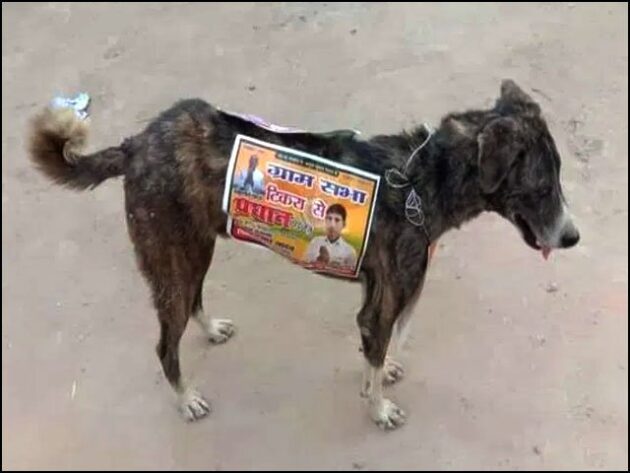 Uttar Pradesh: During the recent elections in the Indian state of Uttar Pradesh, many candidates put up their election posters on stray dogs, keeping all kinds of ethics at bay, so that their message could reach as many people as possible.

In Uttar Pradesh, at least two candidates from Rai Bareli and Baliya districts have reportedly taken to the streets to spread their message “FAR AND WIDE” and “to as many people as possible”. They didn’t even spare the stray dogs and put their election stickers on them.

Some of these images went viral on social media last week. Many people made memes on these pictures and vented their frustrations. The candidate was also happy with the success of his campaign.

But on the other hand, individuals and organizations working for the protection and rights of animals have strongly protested, saying that it does not befit any human being to use animals so ruthlessly for their own publicity.

Reena Mishra, an animal rights activist, asked, “How would a candidate feel if he had his own election sticker affixed to his face and rolled around the city?”

Some have called on the police to take action against such absurd candidates so that they can conduct their campaigns within the bounds of ethics.