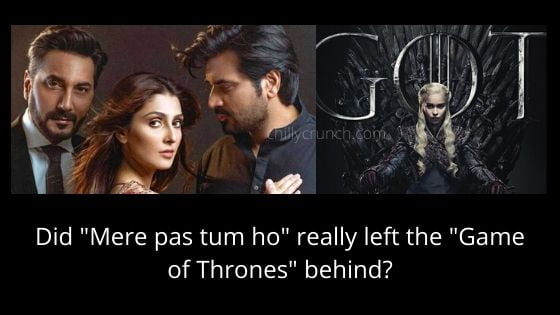 The drama serial “Mere pas tum ho” is making a new record with each episode. Every week, people eagerly wait for the next episode of the play. While with each new episode the play is setting a new record of TRP (Television Rating Point), surpassing other dramas. The storm is over.

According to Google, the drama serial “Mere pas tum ho” has surpassed IMDb (Internet Movie Database), the most popular TV series “Game of Thrones” worldwide. But is it really true? ۔

Unlike Google, however, the drama serial “Mere pas tum ho” rating on IMDb’s website is getting 7.7 instead of 9.9.

It is important to note that the IMDB rating system is subject to each individual vote cast by its registered users.

So far 17 episodes of the drama serial “Mere pas tum ho” have aired. And each episode has received great responses from viewers.